(CNN) — It was a crisp, bright fall morning in Parsons Green on Friday, and as usual, trains on the District line were ferrying commuters from the well-heeled suburbs of west London into the center of the city.

But at 8:20 a.m., just as the latest city-bound service pulled into the station, there was a loud bang and a flash. Terror had struck — and for London’s fourth terror attack this year, in the unlikeliest of locations.

Around 30 minutes outside central London, this verdant, largely residential area in the borough of Hammersmith and Fulham is hardly an obvious target for extremists.

It is an affluent, upmarket neighborhood popular with families and young professionals. Well-kept, pastel-colored Victorian terraces branch off in all directions from the main thoroughfares, which are lined with independent coffee shops, high-end furniture stores and quirky trinket shops.

He and his partner, Angela Mordaunt, 71, who’ve owned a property in the area for 40 years, said they were stunned as details emerged.

The pair were evacuated from their home shortly after the blast and described passengers emerging from the station with torn clothes, dazed and in shock, while others were on their phones desperately calling family and friends. 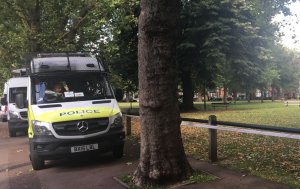 Niyi Shokunbi, 24, was on the train when the device went off — apparently prematurely, and without fully detonating. He recalled scenes of frantic chaos and confusion as commuters scrambled to get off the packed train and onto the platform. There were children and elderly people among them, he added.

“I looked to my left and just saw a herd of people starting to run down,” Shokunbi said, shaking his head in disbelief.

“Out of all the places you know? Usually you hear about these things in like Oxford Street or bigger places but Parsons Green on a Friday morning? … It’s just crazy. You wouldn’t think of it.”

Residents collected quietly on street corners, watching nervously as helicopters whirred overhead. Their “very friendly, happy atmosphere” was interrupted by the sounds of sirens as the emergency services secured the area.

The police lockdown was still in effect on Friday afternoon and with some residents still unable to return home, neighbors were banding together to offer a helping hand.

Tweets with the hashtag #ParsonsGreen offered safe havens, hugs and cups of tea while other locals, like Susan Leslie and her daughter Holly, hastily stuck posters to their front door and garden wall, signaling to passers-by that they were welcome to drop in.

“We are trying to help people because we realized we don’t have any restaurants around here and people need to go to toilets or need to charge their phones,” Susan explained. “In adversity like this, we need to come together, help each other.”

“It’s just the London spirit, really. It’s like ‘keep calm, carry on’ so any way we can help,” Holly added.

A family friend had called from the station earlier that morning to warn of the attack. Both ran towards the station to help but were turned away by emergency responders.

“There were people with lots of burn marks… I can’t believe it’s happening on our doorstep,” Susan said.

People Don’t Know Why We Celebrate the 4th of July!

See the Flyover Videos from Trump’s Salute to America