ST MARY'S CO., Md. - A family who has lived near the accused gunman in a high school shooting on Tuesday said they never would have guessed their neighbor was involved.

"I’m just in shock," says Toni Foreman. "Totally out of character, never would expect, never would assume that anything like that would happen."

The St. Mary's County Sheriff's Office says Rollins, a Great Mills High School student, shot a 16-year-old girl, a student with a glock semiautomatic handgun. She went to the hospital with life-threatening injuries.

He also shot a 14-year-old boy, also a student, and he was taken to the hospital in stable condition.

Seconds later, the School Resource Officer, DFC Blaine Gaskill, confronted Rollins and fired at him, while almost simultaneously, Rollins fired, according to the Sheriff's Office.

Investigators are unsure if Rollins was killed by the deputy's bullet or he killed himself.

"My son was talking about how he would help the blind man down the street sometimes, and he’d look to him as a mentor, he would walk my son home sometimes and last week, my son was playing with him," says Foreman. "He was just a good kid." 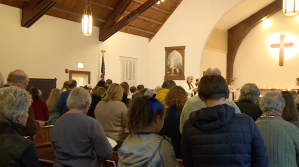 Teaming up with local clergy, the Church of the Ascension, just down the road from the high school, opened their doors for a vigil and prayer service on Tuesday night.

Ironically, he did not go into his full-time job on Tuesday and ended up being one of the first people to get to the 16-year-old girl.

"You sometimes wonder if you're supposed to be somewhere and today definitely, definitely I felt that call," he says. "Most of the things that I deal with are bad car crashes and people who are really sick. When you have a child go into school and shoot another child, it's senseless."

A group of St. Mary's College athletes came to the vigil on Wednesday to help set-up and provide support.

Now several have planned to join hundreds of thousands for the March For Our Lives on Saturday in Washington, D.C., to rally against gun violence and promote school safety.

"Not that it wasn't real to begin with, but it's something that just, now it's like we have to do this," says Hannah Krauss, a junior. "For our community now, we have to go and support."

MONTGOMERY COUNTY, Md. (WDVM) — A Takoma Park man who was arrested on a rape charge on Thursday allegedly admitted to making school shooting threats to a local high school during his police interview.

Montgomery County police said Jason Salinas, 20, was originally arrested for second-degree rape but was already identified as a suspect in the school threat case. During the police interview, he allegedly “made admissions of guilt” regarding school shooting threats called in on February 13 to John F. Kennedy High School in Wheaton, according to police.

MONTGOMERY COUNTY, Md. (WDVM)– Montgomery County council members hosted a town hall Thursday evening at the council building to bring religious leaders and members of the community together to discuss the security within places of worship.

OAK PARK, Illinois (CNN) — An elderly couple is upset and shaken up after police swarmed their car in a parking lot after they left their normal bank.

Ottis Dugar, 86, and his 67-year-old wife Demitri still can’t believe they were mistaken for armed thieves.