“I’m here to get justice for my son,” Monica Plummer, Dalan’s mother, said through tears.

Police said Plummer was robbed and shot at Knights Inn in Laurel on June 25.

“A young brother killing another young brother, it shouldn’t happen that way,” expressed the grieving mother.

The family went from planning Dalan’s 20th birthday party, to planning his funeral.

Detectives have an arrest warrant for the man they believe to be the gunman, 28-year-old Brandon Anthony Holmes of Nothwest DC.

“Whoever shot him, it was personal, it was very personal,” said Dalan’s sister, Tashea Plummer.

They family is begging anyone with information to come forward. 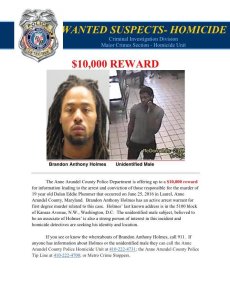 The department is offering up to a thousand-dollar reward.

WASHINGTON (NEXSTAR) -- Limited hospital resources have put countless doctors and nurses in a position where they are forced to pick and choose which COVID-19 patients receive lifesaving treatment.

The fallout from the tough decisions have lead to what some experts call “Moral Injury" -- a condition that violates a person's core moral foundation. Dr. Ron Elfenbein, an emergency room doctor, said the choices take a toll on healthcare workers.

WASHINGTON, D.C. (NEXSTAR) -- After years of controversy, the Washington Redskins made it official Monday: that name will no longer be used.

The NFL team hasn't said what the new name might be, but some lawmakers want other teams to follow suit.