MONTGOMERY, CO — MCPD have been investigating the report of sexual offenses by a Montgomery County Public Schools (MCPS) bus operator.

The investigation revealed that on Tuesday, July 31 at approximately 12:30 p.m., a MCPS school bus transporting students receiving special education services was stopped in the area of Yates Road in Silver Spring. During the time that the school bus attendant left the bus to assist in the drop off of another student, the driver who remained on the bus, sexually assaulted the 12-year-old female victim. The investigation resulted in charges for inappropriate sexual contact.

The school bus camera captured video of the assault.

Bus operator Etienne K. Kabongo, age 62, of Gaithersburg was arrested on August 5 and charged with second-degree rape, third-degree sexual offense and the sexual abuse of a minor.

Special Victims Investigations Detectives are concerned that there are other victims. Etienne Kabongo, is known as “Mr. Steve” to some students, and has worked since 2006 as a bus operator, primarily driving for students receiving special needs education, at multiple schools across the County. Anyone who is concerned that a child has been victimized by Kabongo is asked to call detectives at 240-773-5400.

Below are two photos listing the schools that Kabongo drove for since 2009 (MCPS said that information for the years 2006-2008 are not available): 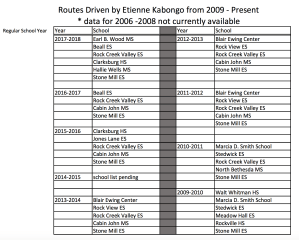 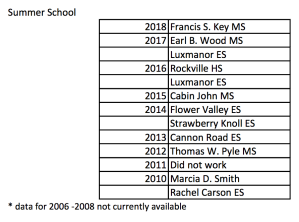 The following statement was released by MCPS about Etienne K. Kabongo:

Montgomery County condemns all forms of sexual abuse and harassment. The safety and security of students in Montgomery County Public Schools (MCPS) is our top and most important priority. Our hearts ache for the student, who endured this horrific act of sexual violence, and her family.

In April the Council’s Education Committee met with Dr. Jack Smith, Superintendent of Schools, and MCPS leadership for a briefing on the school system’s child abuse and neglect policies. While Montgomery County’s Board of Education is ultimately responsible for establishing and implementing these policies, we will continue to work together to provide the funding needed for training to prevent and spot sexual abuse and harassment and for the security equipment and personnel necessary to protect our students, especially those who cannot speak for themselves.

We encourage any other students or individuals, who may have been victimized by the accused, or their family members to contact the Montgomery County Police Department at 240-773-5400.

WASHINGTON (NEXSTAR) -- The nation's crash program to develop a vaccine to protect against the coronavirus has been given the sci-fi-style name of "Operation Warp Speed."

Senators got an update on the all-out effort to identify, test, and quickly distribute a vaccine — or vaccines — in world-record time.

Now, these small businesses are struggling to stay afloat.

WASHINGTON, D.C. (NEXSTAR) -- COVID has impacted just about every corner of the global economy.

As the U.S. enters into a new trade agreement with Canada and Mexico -- all three nations may have to make adjustments.