BOYDS, Md. -- A Maryland man who was supposed to start his murder trial on Thursday instead appeared to have killed himself inside his jail cell.

It happened hours before jury selection in the case against Tyler Tessier was set to begin.

Tessier was found hanging from bed sheets at 4:55 a.m. according to a statement released by the Montgomery County Department of Correction and Rehabilitation.

It went on to talk about the effort to revive Tessier both by jail personnel and paramedics.

According to the statement, Tessier was awakened at 4 a.m. and was seen in his cell at 4:36 a.m. by a guard during a routine check. It noted that breakfast was served around 4:45 a.m. not indicating how that played a part in the guards’ movements and whether or not Tessier was seen by employees at the time.

Tessier was facing first-degree murder charges. He was accused of shooting and killing his girlfriend, Lauren Wallen. Wallen was four months pregnant at the time she was killed in September of 2017.

Prosecutors with the Montgomery County State’s Attorney’s Office said Tessier was a pathological liar who carried one dual affairs until they caught up with him, leading to Wallen’s murder. 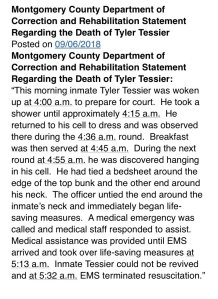 WASHINGTON, D.C. (NEXSTAR) -- When Congress passed its first major stimulus package in the midst of the COVID crisis, it provided extended unemployment benefits which are set to run out.

While millions of Americans are still out of work, the additional unemployment benefits they are getting -- providing an economic lifeline for many -- are set to expire.