(CNN) — At least 235 people were killed and another 109 injured in an attack on a Sufi mosque in Egypt’s North Sinai region on Friday, Egyptian state-run media reported, in what appears to be the deadliest terror attack on Egyptian soil.

After at least two explosions, gunmen who were waiting outside the mosque opened fire at worshipers as they fled Friday prayers, state-owned Ahram Online said.

The attack targeted al Rawdah mosque, situated in the village of al Rawdah between Bir al-Abed and the city of al-Arish.

The target: The mosque, located in northern Sinai, is known as the birthplace of an important Sufi cleric.

World leaders respond: Egypt has declared three days of mourning, while figures in the international community condemned the attack. US President Donald Trump called it a “horrible and cowardly terrorist attack on innocent and defenseless worshipers in Egypt.”

The gunmen had set up “ambush” locations and opened fire on ambulances as they were transporting wounded worshipers from al-Rawdah toward al-Arish before the arrival of security services, eyewitnesses reported.

The mosque that was attacked is known for being the birthplace of Sheikh Eid al-Jariri, a Sufi cleric considered the founder of Sufism in the Sinai peninsula. Sufism is a mystical branch of Islam that some ultra-orthodox Muslims consider heretical. 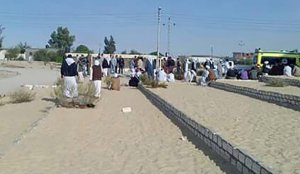 Egyptian President Abdel Fatah el-Sisi is meeting with a security committee to discuss repercussions of the attack, Masriya TV reported. The presidency has declared three days of national mourning.

No claim of responsibility

No one has yet claimed responsibility for the attack and there is no word yet on what happened to the militants involved. However, it bears the hallmarks of an attack by ISIS.

Egyptian security forces face almost daily attacks from ISIS-aligned militants, whom they have been battling in northern Sinai for several years. However, mosque attacks are relatively rare in Egypt.

In October 2015, 224 people were killed when a bomb brought down a Russian passenger jet which crashed in the Sinai Peninsula. ISIS’ affiliate in Egypt claimed that attack.

UK Foreign Secretary Boris Johnson said he was deeply saddened by what he described as an “abhorrent attack” on a mosque. “My sincere condolences to all those affected by such a barbaric act,” he tweeted.

The UK Ambassador to Egypt, John Casson, tweeted that he was “disgusted” by the “evil attack that killed and injured so many Egyptians in Sinai today.”

He added: “These attacks on people praying in mosques & churches only strengthen our determination to stand together, & defeat terrorism & hate.”

Jordanian King Abdullah condemned what he called a “heinous terrorist attack” in a tweet on the Jordanian Royal Family’s official account.

“We stand with Egyptians in their war against terrorism and against anyone who tries to harm the Egyptian national security,” Palestinian Authority President Mahmoud Abbas said in a statement.