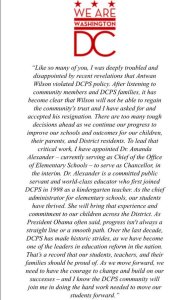 WASHINGTON, DC -- Mayor Muriel Bowser has accepted the resignation of Antwan Wilson, the man in charge of DC Public Schools.

Bowser held a press conference on Tuesday explaining that she felt Wilson had lost the trust of council members and the public leading her to ask for his resignation only a few days after backing him publicly.

On Monday, Wilson gave an interview to WHUR 96.3 and said that he had no plans to step-down as the head of DCPS.

The first-year chancellor's job was in jeopardy after Wilson sought and was granted preferential placement for his daughter to transfer high schools, forgoing the district's lottery process.

In the fallout, Mayor Muriel Bowser accepted the resignation of DC Deputy Mayor of Education, Jennifer Niles who helped facilitate the transfer, last Friday. Wilson said he went to his boss in an attempt to make the transfer not realizing his child was bypassing hundreds of people on the wait list.

And Mayor Bowser has said that a series of corrective actions have been set for Wilson.
However, a number of City Council members, including Vincent Gray, Robert White, Jr., and Mary Cheh are calling for his resignation as well.

“For me, this is just a catalyst. I have watched as we are graduating people who are not able to be career or college ready, some of whom are functionally illiterate.”, said Ward 3 Councilmember Mary Cheh.

This latest controversy comes just one month after reports surfaced that teachers were being pressured into graduating students at Ballou High School regardless of attendance records and students wrongfully being placed in credit recovery classes.

While Cheh acknowledges that the problems facing DCPS did not start with Wilson, she says that his willingness to carryout the same policies are problematic.

“He didn’t inherit a perfect system. He inherited a flawed system, but he’s content to carry on with that system. That to me is the need for replacement.”, said Cheh.

During the WHUR 96.3 interview, Chancellor Wilson said his daughter was experiencing social and emotional hardships at the school she was assigned to.
At the time, he said, he thought he took the right course of action.

“It certainly didn’t seem fair to me to be making decisions about my own child in DCPS, so I asked the Deputy Mayor what to do and for direction and that is my supervisor. I thought I was making the right choice.”, said Chancellor Wilson.

During the WHUR 93.6 interview, Wilson acknowledged that he made a mistake and says he wants to continue to move DCPS forward.

Just when it looks like there's a trade deal with China, the coronavirus hits, restaurants close, and crop prices crash.

WASHINGTON (NEXSTAR) - As protests continue across the country, lawmakers in Washington are split over the president's response to the national outcry.

"This is a law and order president," Sen. Kelly Loeffler (R-GA) said Tuesday.