WASHINGTON, D.C. — On Friday, at-risk DC teens will participate in a project that turns illegal weapons seized by the MPD into art and functional objects like benches.

This effort is part of the Youth Creating Change program, which falls under the Youth and Family Services Division of the police department. The project is called Guns to Roses. 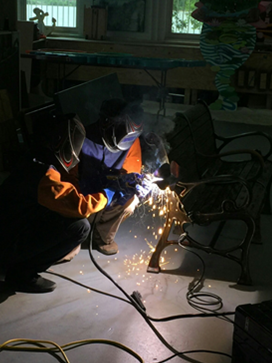 The teens will use traditional blacksmithing to turn the firearms into something new. The project’s focus, MPD says, is two-fold: to strengthen the relationship between DC’s youth and its police, and to provide these teens with skills that could help them find employment in the construction industry.

Since 2016, MPD has recovered almost 3,000 illegal firearms, and violent crime in the District is at its lowest levels in nearly a decade.

WASHINGTON, DC (NEXSTAR) — Students, parents, and colleges are using the summer break to debate if, when, and how to return to class this fall while the coronavirus crisis continues.

The Senate Health, Education, and Labor Committee held a hearing Thursday with college leaders on how best to reopen their campuses safely.

WASHINGTON, D.C. (Nexstar) – On Thursday, Senate Democrats stood in the halls of U.S. Capitol in silence for eight minutes and 46 seconds.

WASHINGTON (NEXSTAR) ─ Centers for Disease Control and Prevention (CDC) Director Dr. Robert Redfield warned lawmakers Thursday that the coronavirus is no less contagious now than it was a few months ago.

He said he shares their concerns about the ongoing spread of the virus as states continue to gradually reopen.

Lawmakers divided over Mattis’ criticism of Trump’s response to protests

US lawmakers worry about child abuse during pandemic, push for more funding to help