(CNN) — Tuesday marks the final special election before November, and a reliably Republican seat is once again at risk of switching parties.

Republican state Sen. Troy Balderson is fighting to maintain his party’s three-decade hold on the Ohio 12th District, which spans north and east of Columbus.

President Donald Trump and Vice President Mike Pence have campaigned there in an effort to get Republicans to vote for Balderson and tamp down Democrat Danny O’Connor’s momentum. The candidates will square off again in the fall, but a loss for Republicans will serve as a major psychological blow ahead of the critical midterm elections. 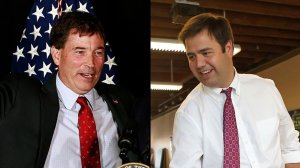 The implications of this race, along with critical contests in Michigan, Missouri, Kansas and Washington state, will give a temperature of voters across the country that hasn’t occurred since the last major multi-state primary in June.

IS THIS A SIGN OF A BLUE WAVE? If O’Connor prevails, it will be a strong indicator that Democrats can win in areas that have long eluded them. With only 23 seats needed to take back the majority in the House, a win in this Columbus-area district will put that in greater reach for them (plus the number will tick down to 22). If Balderson wins the final vote, Democrats will point to the margin to show gains. Former Rep. Pat Tiberi won the district with a margin of about 37 percentage points in 2016. A loss within a close margin less than two years after a strong victory for the GOP will still be a big talking point for Democrats.

HOW STRONG IS THE TRUMP BUMP? President Donald Trump’s endorsement in Republican primaries has given last-minute boosts to candidates like Katie Arrington in South Carolina. His support for John James in Michigan and Kris Kobach in Kansas could help bring them over the line in their primaries tonight.

But will Trump’s backing be enough to take Balderson over the finish line despite Democratic enthusiasm for O’Connor? The race will say a lot about the President’s impact on general election match-ups in November.

A.O.C. ALL OVER AGAIN? Alexandria Ocasio-Cortez is barnstorming for progressives across the country after her unexpected primary victory over House Democratic Caucus Chair Joe Crowley in New York. She’s campaigned for James Thompson in Kansas and Abdul El-Sayed in Michigan, but can she help outsider candidates in areas that aren’t liberal strongholds?

What to watch tonight

OHIO-12 SPECIAL ELECTION (polls close 7:30 p.m. ET): Like many races this year, this has come down to turning out the base. Trump stumped here on Saturday to turn out his base (he won the district with 52% in 2016). O’Connor will need Democrats to turn out in droves, combined with some flips from Independents and Republicans. A mid-August race with a potential for low turnout could be the right mix for Democrats. They are hoping to replicate Conor Lamb’s impressive victory in Pennsylvania earlier this year, rather than Hiral Tipernini’s close but ultimate loss in Arizona. Like the Arizona special election, both candidates will face off again in November.

KANSAS (all polls closed by 9 p.m. ET): Kris Kobach, the conservative secretary of state who served on the President’s voter integrity commission, has been tight in the polls in the race for governor, but Trump’s last-minute support of him on Monday could shake up the race. GOP Gov. Jeff Colyer is competing for a full term after the appointment of unpopular Gov. Sam Brownback to the State Department. Brownback’s deep budget cuts to the state have been unpopular, leaving Republicans worried they may lose the seat in November. Kobach’s staunch conservative views may not play as well in the general election as they might normally. For Democrats, Bernie Sanders and Alexandria Ocasio-Cortez came to the ruby red state for Brent Welders, which could upend a race that Democrats think they can flip with candidate Sharice Davids. If Welders wins, Democrats worry he won’t have enough broad support to beat GOP Rep. Kevin Yoder.

MICHIGAN (polls close 9 p.m. ET): The Democratic race for the open governor’s seat once again pits a Sanders progressive outsider against a well-known Democratic leader. Former state Senate Majority Leader Gretchen Whitmer has tried to boost her liberal bona fides with her experience, focusing her campaign on her work to expand Medicaid in the state. She’s leading in the polls, but it was the Wolverine State that gave Sanders an unexpected win during the 2016 primaries. Abdul El-Sayed, whom Sanders has campaigned hard for, is hoping to bring those voters out again. If he wins the primary and wins in November, he would be the nation’s first Muslim governor. On the Republican side, John James — an African-American Iraq War vet — got a boost from the President that could put him over the top and shake up the Senate race against three-term Sen. Debbie Stabenow. Stabenow is expected to win in the fall, but James could prove to be a formidable foe.

MISSOURI (polls close at 8 p.m. ET): Tonight’s primary will kick off one of the most strongly contested Senate races of the year. State Attorney General Josh Hawley is widely expected to win the Republican primary, setting him up to take on two-term Sen. Claire McCaskill. McCaskill has won by facing deeply flawed candidates in her previous elections, but Republicans are hoping this time that Hawley can avoid past mistakes. In a state Trump won by almost 20 points, you can expect to see him continuing to campaign hard here for Hawley (and for more comparisons between McCaskill and Hillary Clinton). Keep a lookout in the 1st District. Democratic Rep. Lacy Clay has faced criticism from the left, and though he’s expected to win the primary against nurse and activist Cori Bush, there is potential for another Crowley-type loss in the Show Me State.

WASHINGTON (polls close at 11 p.m. ET) — Washington state could be fertile ground for Democrats to take the majority back in Congress. The retirement of GOP Rep. David Reichert in the 8th District has given them hope in the Seattle suburbs and beyond for another seat in the House. Democrats in the state openly admit that losing here to perennial Republican candidate Dino Rossi (assuming he advances as expected in the open primary) would be embarrassing for the party. The real pièce de résistance in Washington (and for Democrats overall) could come in the 5th District, where House GOP Conference Chair Cathy McMorris Rodgers will most likely face a tough fight against former WSU Chancellor Lisa Brown. Polls are tightening in the race, giving Democrats hope they can take out the number four Republican in the House.