COLUMBUS, New Mexico (Border Report) — A fifteen-year-old whose mom asked she not be identified by name, gets up in the moonlight around 5:45 a.m. every morning to prepare breakfast for her and her 11-year-old brother, whom she has to rouse for school every weekday.

Both of their schools are in the United States, in Deming, New Mexico, about 45 miles from their home in Palomas, Mexico.

We are choosing not to identify some of the students because we weren’t able to speak to their parents for permission to use their names.

The girl attends Deming High School. Her brother is a middle-schooler who attends at the public campus nearby. She said, in Spanish, that she doesn’t mind waking up early and that she wants to live in the United States.

“There are more opportunities here for work,” she said. “I like it here.” 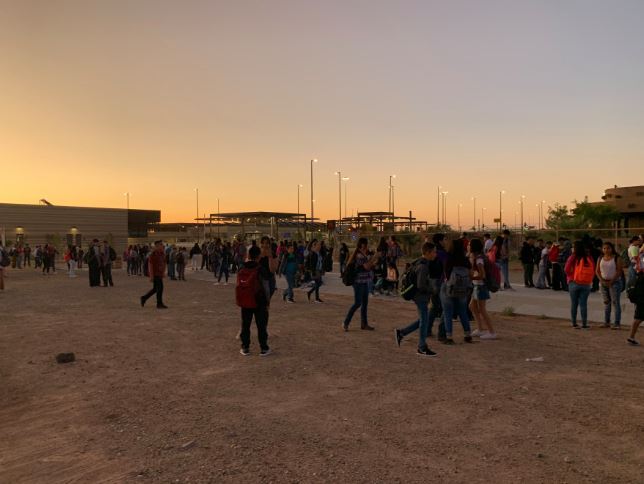 Students who live in Palomas, Mexico, wait for school buses to take them to a school in Columbus or Deming, N.M., on Thursday, Sept. 26, 2019. (Border Report Photo/Sandra Sanchez).

Like hundreds of other students from Palomas, Mexico, who were gathered Thursday morning in a parking lot of the port of entry in Columbus, New Mexico, she and her brother are American citizens. But their families are not. Therefore, they live in Mexico but they attend school in the United States.

Click for to read more from our friends at Borderreport.com

FDA adds to list of hand sanitizers to avoid, making it 14 total

US may ban TikTok and other Chinese social media, Pompeo says

Baby on board: Florida woman gives birth on pontoon boat on 4th of July

Dog mauls toddler to death at Fourth of July party

All Florida school districts must reopen campuses next month, Dept. of Education says

FDA adds to list of hand sanitizers to avoid, making it 14 total

US may ban TikTok and other Chinese social media, Pompeo says

Baby on board: Florida woman gives birth on pontoon boat on 4th of July

Return to schools won’t be a one-size-fits-all deal, says Fauci

After Supreme Court ruling, what’s next for DACA?