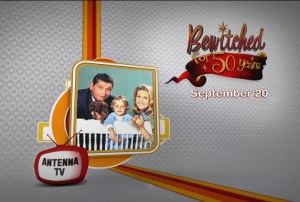 To celebrate the 50th Anniversary of Bewitched, Antenna TV is airing a 50 back-to-back episode marathon on September 20th.

Click the video below to find out where you can find Antenna TV.

Antenna TV is celebrating 50 years of “Bewitched” with 50 episodes of the classic series for a marathon airing on Saturday, September 20th beginning at 1pm.

Antenna TV’s “Bewitched For 50 Years” marathon will be hosted by “Bewitched” star, Erin Murphy, who starred as Tabitha Stephens, the magical daughter, during the show’s original run from 1964-1972.

Erin Murphy will also host the 50 episode/25 hour marathon and provide insights and commentary in interstitial segments between the episodes. The marathon will feature a selection of the top episodes from the series, with some of Erin’s favorite episodes. “I am so happy to be participating in Antenna TV’s Bewitched anniversary marathon. The enduring popularity of Bewitched, and its loyal viewers, means so much to me. I’m honored to be part of the legacy,” said Murphy.

2pm …And Something Makes Three

3pm Driving is the Only Way to Fly

7:30pm And Then There Were Three

12am Hoho the Clown

2am Toys in Babeland

3am A Safe and Sane Halloween

4am A Prince of a Guy

6am Samantha on Keyboard

9am Mrs. Stephens Were Are You?

10:30am Samantha and the Beanstalk

11am A Bunny for Tabatha

11:30am Tabitha’s Very Own Samantha

1pm Hansel and Gretel in Samantha

Photos: More violence shakes the US